Actionetics MD Pricing: Is it worth the money? 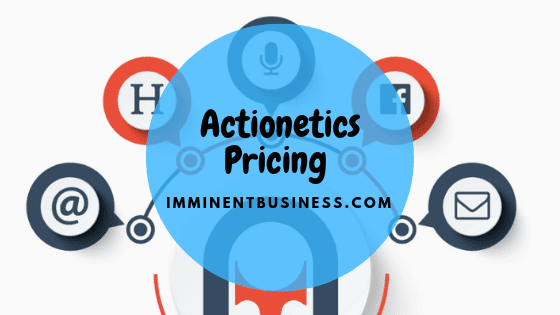 What is the Actionetics MD pricing?

Are you a marketer trying to get their feet or already a seasoned marketer familiar with sales funnels and ClickFunnels, especially the front-end sales funnels?

Well, don’t stop there. It’s time to take a nose dive into the inner world of Sales funnels.

The knowledge gained is not only influential in driving up your business sales but also important in making your sales funnel and marketing automation guru.

In our analysis of ClickFunnels, it’s clear that you could be making the real dough, only if you chose to learn more about ClickFunnels’ premium feature, Actionetics.

While ClickFunnels does a great job of nurturing your funnels and communicating with your leads effectively through personalized messaging, it doesn’t do everything, which is why you need Actionetics.

What is Actionetics MD?

Actionetics refers to a tool developed by ClickFunnels to allow business owners and online entrepreneurs to take advantage of the Follow-up funnel. 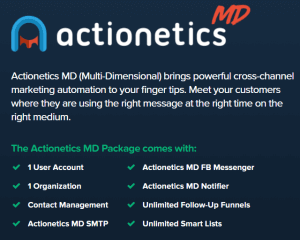 The Follow-up channel is constantly overlooked, yet it could be the missing ingredient for reaching out and tapping on your leads’ shoulders.

Actionetics is the one tool that allows you to follow up with your potential leads after they buy a service or a product from you.

Unlike the brick and mortar businesses, it’s wrong to forget about your customers in the online world.

Don’t you think that it would be pretty cool if you’d turn one sale into many subsequent sales, all thanks to a follow-up funnel? So, how about getting Actionetics?

Besides reaching out to your active customers, Actionetics also makes it possible for you to turn more of your site visitors into paying customers by simplifying the process through which you send messages to the leads.

Actionetics is at the center of email personalization. You can also use it to send messages to your visitors based on their behavior once they set foot in your funnel.

Therefore, you could think of Actionetics as the easiest way for you to speak to your site visitors directly while sending them the perfect messages they need and exactly what they need them.

Thanks to the design of this follow-up funnel, you can get rid of many email marketing and marketing automation tools such as:

All these benefits result from the fact that Actionetics serves as the second type of funnel. 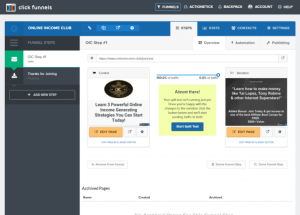 Get Actionetics for FREE

If used properly, this funnel promises to increase profitability through lead generation and conversion optimization by bringing back all the leads and customers that have been -there before, but they need a bit more nudging.

According to Russell Brunson, the creator of ClickFunnels, Actionetics allows you to turn $1 into between $10-$20.

Actionetics is not a standalone service, unfortunately, meaning that it’s harder to run a comparison on process alone when you pit it against other service providers.

The other catch is that you need a separate, 3rd party SMTP server to use Actionetics and to send emails to your leads and customers. You could, however, use SendGrid, which is a free option.

The other alternative is to use the SMTP services offered on your web hosting account (that is if you have access to one). If these options fail, you will have to pay for another extra service, for example, Mandrill.

Even though there is not standalone Actionetics plan, note that you can save someone money and enjoy the features offered by Actionetics by the paying $997 upfront (6-month offer), which equals a monthly rate of $167/month instead of $297/month.

The other feature you will get when you pay for the Etison plan is ClickFunnels’ Backpack, a great affiliate marketing management tool.

How to Create a Follow-up Funnel 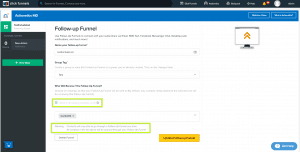 Get Your FREE 14-Day Trial

Make sure you start by creating a multi-dimensional Follow-up funnel (from emails or social media etc.

Once you have your funnel, determine and select the types of messages you wish to send: Email Messengers, Facebook Messenger, Retargeting Messenger, Desktop Notifications, and Mobile Notifications.

Then send messages using these platforms.